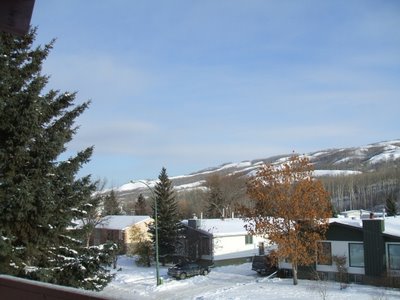 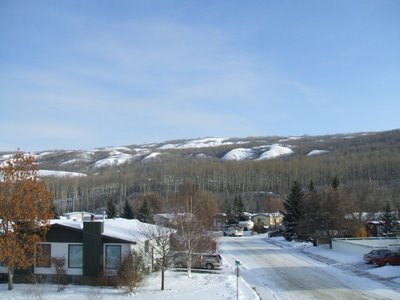 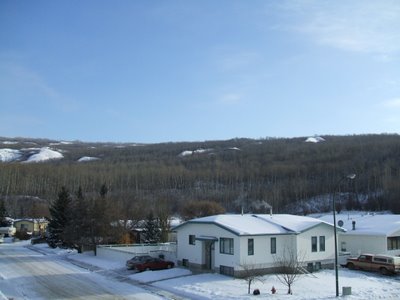 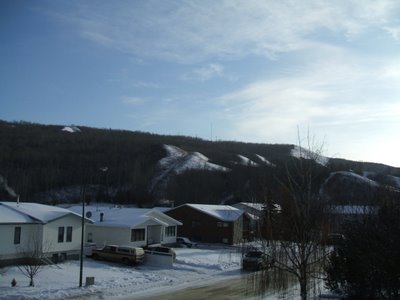 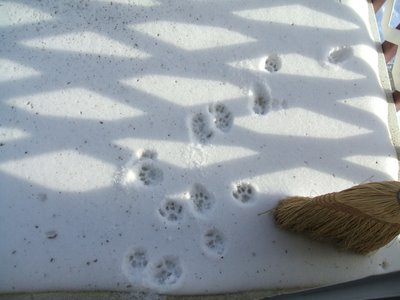 For those of you snow lovers who wish to live vicariously, this is the view from my balcony a week ago. Jack even decided to be brave and check it out. As you can see, he got about as far I would before he decided he'd had enough. Most of it is gone now, we had a couple warm days, though we should be getting some in fresh tomorrow. The Pictures below are from a week earlier. 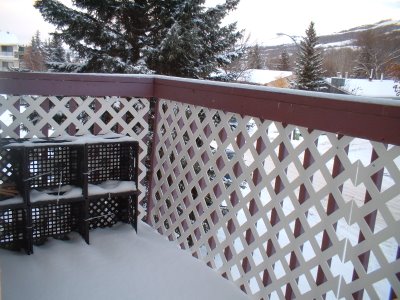 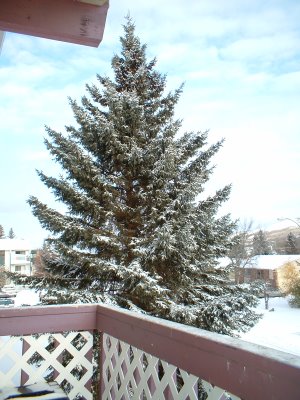 This is How She Feels- a series of small shrines 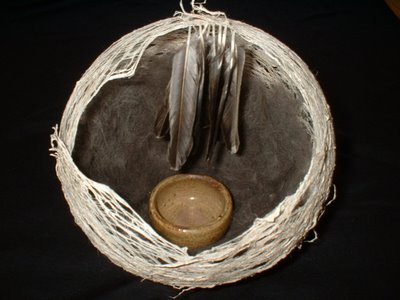 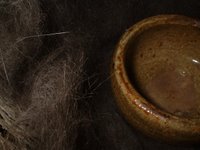 "..damned by Psyche's wisdom..." is a line from a poem of mine. This piece is about a personal search for wisdom. The cat hair represents peace, comfort and home, the feathers, freedom, all contained in an egg shaped ball. 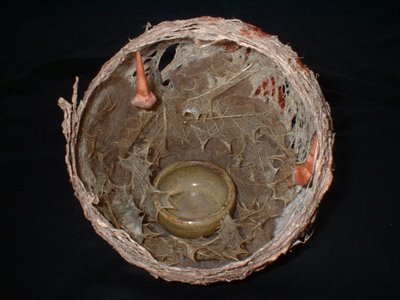 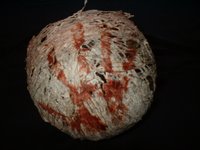 'The War Queen' is the title of a poem cycle I have been writing. The edge of the ball is tinged red, and a red handprint is on the back, an image of blood on one's hands. The teeth signify an all-consuming hunger, and the prickly holly leaf skeletons inside are pain and ruin. This piece is about the sometimes painful and bloody cost of wisdom and doing what one thinks is right. 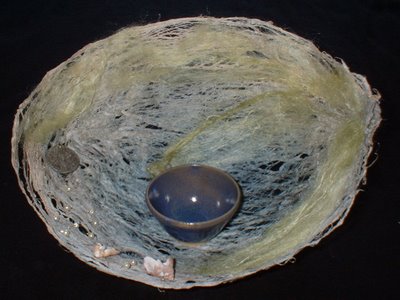 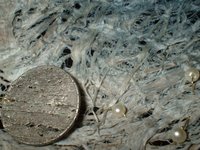 'When Sophia Wakes' is a line from a poem of mine about the waking of wisdom. The various elements signify the ocean, salt water, tears, and the forms of wisdom and how we pay for them.
Posted by Brenda at 11:40 PM 4 comments: 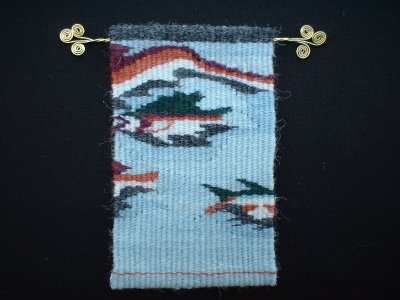 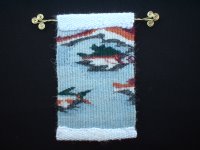 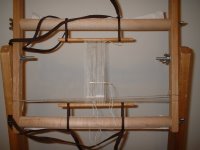 My loom was juri-rigged from an embroidery scroll frame (on a stand), a couple pegs from my spool rack, and a pair of shoelaces. 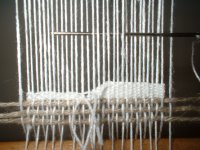 Work was woven with cut lengths of thread, on a blunt needle, which was also used to beat down the weft.
Weft ends were sewn in after the tapestry was finished.
The rod from which it hangs is made of twisted gold-coloured wire. 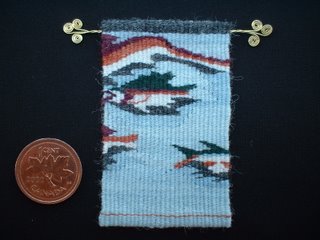 This piece was shown in the group show "Small Talk" at the Ontario College of Art and Design Student Gallery Oct 11-Nov. 4, 2006.
Posted by Brenda at 10:00 PM No comments: 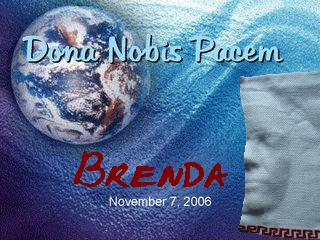 Oh, and I also believe you should go out and adopt a homeless kitty. It will make you a happier person.
Ok, or maybe a dog, or a ferret, or even a turtle.
Posted by Brenda at 2:15 AM 2 comments: 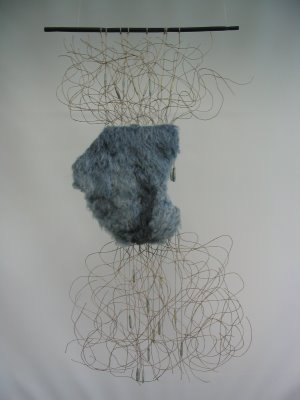 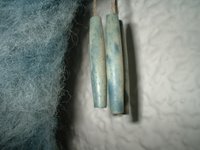 “ In many cases the center is conceived as an axis (axis mundi) extending vertically to the pole star and downward to some pivotal point in the abyss. Iconographically, it may be represented as a mountain, a stairway or ladder, a pole or very commonly a tree…” Joseph Campbell, The Mythic Image p. 190. 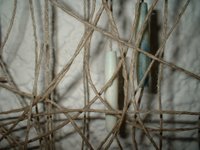 Axis Mundi is a work of personal mythology. While the concept of a tree as the pivotal point around which the universe turns is common among many cultures, like most archetypes, what one sees in it depends upon the person who is doing the looking. For me, it is the oak that stands steadfast and strong, the hazel from which the seeds of inspiration fall, the ash that forms the World Tree on which Odin hung to gain the wisdom of the runes. 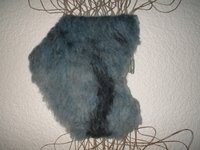 Above and below, the roots and branches tangle, many paths to the Celestial realms and to the Underworld, which cross and re-cross each other, too convoluted to follow clearly along their entire length. In the middle is a hazy, indistinct tree, dream-like and perhaps ominous, but just as possibly calming. It is a place of mystery and refuge, a doorway to other worlds.
This piece was shown in the Capilano College Grad Student Art Show at the Seymour Art Gallery in Deep Cove, North Vancouver, BC, May 9-June 4, 2006.
Posted by Brenda at 8:57 PM 1 comment:

Bright Face of the Moon 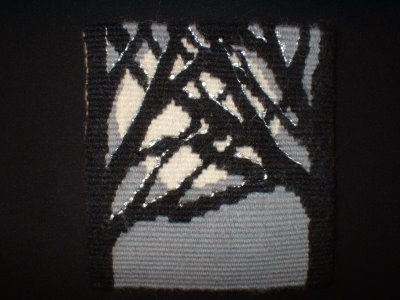 tossed
aside, as casually as shrugging
as a matter of small import
I have never seen
such blank eyes
that do not remember my face
as more than fragment reflections 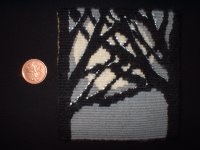 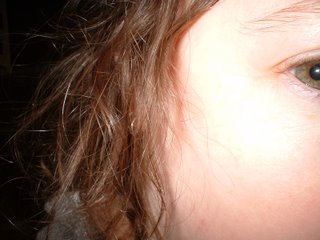