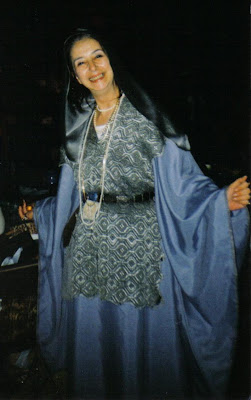 She was a lovely person; intelligent, kind, with a wicked sense of humour, and even though I hadn't had the chance to know her well, I thought of her often. While she wasn't the first to introduce me to the world of textile arts, she was one of the people who first encouraged me to take it up again, which eventually led me into being a textile artist professionally. She was also the one to introduce me to the scaryscary world of fibre and needlework shows. Ten+ years later I still haven't used all the yarn I got that day.... 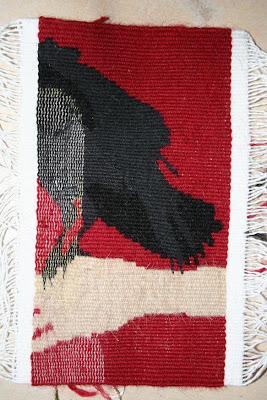 Not so much with the working. So I stopped halfway through, since I was under a deadline, and needed the other half of the warp for another piece.

I was using silk, single strand for the ghostly face. I think it would have worked if I had been planning on only doing the vague shape of a head, but even looking at it closely in person, you can barely tell the difference between the yellow hair and the flesh coloured skin. I can kind of see where the nose and mouth are, but the eye is completely lost.

I think I'm going to try it again with thicker thread for the face (or doubling-quadrupling the thread).

The various black threads for the raven look really good though. Better in person, the flash exaggerates the differences.

Sing Your Dead to Sleep 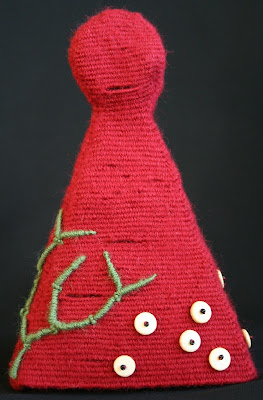 are we lost
and widow-damned
...sing the dead to sleep
who no more raise the sun among us
who no more lay the stars to rest 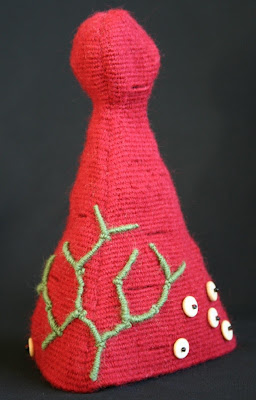 “Sing Your Dead to Sleep” is one of a collection of roughly figural pieces I am working on; a kind of fetish doll, meant to house a strong emotional concept, rather than to impose energy. This piece is one of mourning an overwhelming loss, portraying a personal ritual of farewell. 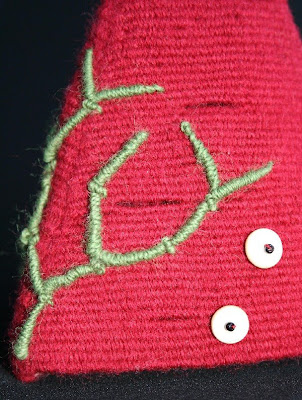 Linen warp, wool weft. One of my few pieces not made predominantly with recycled/reclaimed/secondhand materials, the linen and wool were purchased, though for another project. The beads are woven in, the white discs coming from an old necklace no one wanted, and the seed beads were also purchased for another project. The green branching plant was embroidered on after shaping, with long and short bullion stitches.

The body was woven with large slits, with the weft on either side being pulled deliberately too tight to cause the slits to gape. It was also woven with curling patterns in the warp, which are really only visible when seeing it closely in person (you can see it a little between the head and the stitching and beads on the first picture).
Posted by Brenda at 1:36 PM 1 comment:

I Will Give you Only Winter 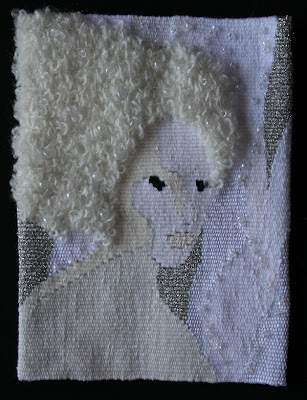 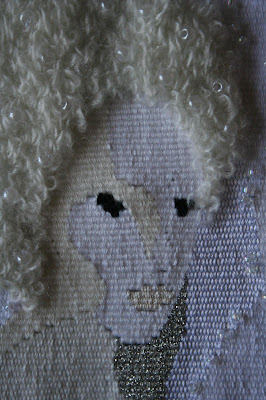 This piece is almost entirely recycled, including the warp. I think the white silk in the face and the cream silk used for the lips were the only thing threads I purchased new. Crochet cotton, rayon embroidery floss, cotton twine (same as warp), multi-strand silver (flat strands twined with thread) were used for the background, and the small iridescent beads were woven in on white sewing thread. The body was done with white and black silk floss, cream silk embroidery thread, thrums of unknown fibre and off-white cotton floss. The hair is boucle of unknown fibre, with pearl seed beads woven in. The pearls were definitely second hand. I can't remember if I bought the iridescent beads or not. I've have them lying around a long time.

The warp was some kind of cotton twine-like thread I had lying around. Bad for warp, I lost two warp strands and a couple looked in danger of fraying apart when I had to stop because I was getting too close to the top of the loom a touch shy of the original design. I think I may just stick to linen warp in the future for anything over a couple inches wide. It's the only thing I haven't had grief with.

It was originally supposed to be 15 cm x 15 cm, but after a slight design change in the hair, I think it actually looks better this way. It would have been nice to get the entire piece in stark white and silver, but even the white silk isn't truly white, and all of my linen, silk and wool threads are actually off-white through cream coloured. Looked very 70's.

Also, this piece sucked to weave. I think I took out at least 90% of it at least once, as one thing after another just didn't work right.
Posted by Brenda at 1:20 PM No comments: